I hadn’t really thought about Tutankhamun, or even photography, for a couple of months while I got on with teaching something else, because that’s how academia works sometimes. But about a month ago, inevitably, Tutankhamun hove back into view. First with new research I’ve been doing on the 1972 British Museum exhibition (which I’ll write about soon), second with plans for the Cambridge version of my own ‘Photographing Tutankhamun’ exhibition (which I’ll be starting to install tomorrow morning), and third, just this past week, with the proof version of my book, Photographing Tutankhamun, due out by the end of this year from Bloomsbury. The cover design was agreed months ago, to fit the style of the fantastic ‘Photography, History: History, Photography’ series in which my book will appear. 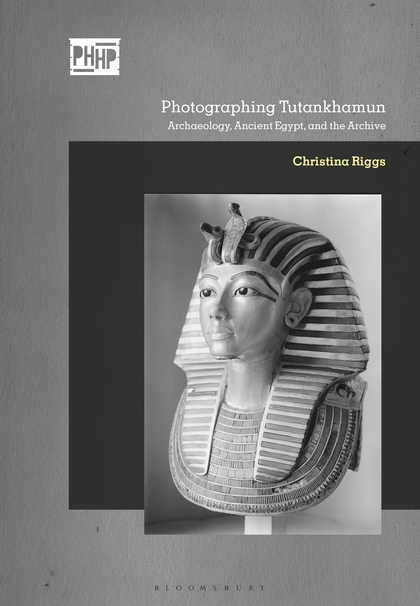 The proofs I received this week are the text inside – all 280-some pages of it, which will be closer to 300 by the time the index is done. There’s always a pain and a pleasure to this stage: the pain of little errors that have crept in, inconsistencies that escaped even a good copy-editor, or things I realize are my own fault, where I’ve changed my thinking about a phrase or word or idea. But there’s a pleasure, too, in seeing how well the text and images fit together, and in seeing one’s own words really – or almost – ‘in print’, rather than on my laptop screen or my tattered, much marked-up manuscript print-out.

For me, a frustrated novelist, opening lines matter – and I always, always, write the first chapter first. So the start of Chapter 1, which you see above in the PDF proof, is the first thing I wrote for this book, when I returned to my home in Norfolk after carrying out three months of research in the Tutankhamun archives at Oxford University. I thought I was going to write a pretty straightforward book about how this most famous of archaeological finds, documented by a famous excavator, through a set of famous photographs, told us something about the relationship between archaeology and photography in 1920s Egypt. But somewhere in those archives, I had a little crisis. The kind of crisis that, fortunately, I’m now experienced enough as a researcher to know is a Good Thing. Because it takes some kind of crisis, big or small, to get to the breakthrough that shows you what your work is really about.

When this happens while you’re a student – it happened to me, and I see it happening now to my own students – it feels frightening. Rather than proof of your abilities and ideas, it feels like the opposite: proof that you were never cut out for this kind of work. Proof that all those years of study, of living on very little money (and loans), of patiently explaining to concerned relatives that being an academic is, indeed, an actual job even if no one they’ve ever met does it. All of that can just make the crisis worse. So yes, fortunately, I’d been there before – and was carrying out my Tutankhamun research with the security of a good job and the comforts of a visiting fellowship at All Souls College. That meant I could get out of the archive, have a nice lunch, and think through the crisis and what it meant for my research project.

And here’s what I thought: this wasn’t (just) a book about photography and archaeology in 1920s Egypt. This was a book about archives. About ‘the archive’ in both a very down-to-earth sense (papers, prints, albums, files, letters, documents) and in a more abstract sense, because archives – records – are the foundations of modern society. Creating, storing, filing, and retrieving information lie at the heart of our political, fiscal, and legal systems, not to mention organizations ranging from businesses to cultural organizations. Archives matter because they can give us history from two sides: the side that gets conscientiously recorded and filed away, and the side that slips through. That’s the side that doesn’t make into official accounts; the comments and inclusions (or exclusions) that are meaningful only with hindsight; or the information and images that have been buried, overlooked, or ignored. Archives made it possible for a research team at University College London to create a database of all the people – normal, average people – who benefited financially from the slave trade, for instance. And there are sound reasons why the destruction of archives – as the British foreign office did when it withdrew from one-time colonies – raises such ire, or should.

Maybe archaeological archives, like the Tutankhamun archive, don’t seem likely to yield dramatic new insights into modern history. It’s just ancient stuff, right? That’s certainly how most Egyptologists have used the Tutankhamun records – the ‘just the facts, ma’am’ approach to antiquity, I often call it, because it assumes (like Sergeant Friday in the old Dragnet TV series) that there are some ‘facts’ you can get to without paying much attention to how they’re being told, or by whom. But archaeology in 1920s Egypt was as political as, well, pretty much any archaeology in the Middle East, from the 18th century to the present day. Until now, archaeology has mostly been told from only one, supposedly disinterested, point of view, with firm ‘facts’ as its focus. Once I started to see the Tutankhamun photographs as part of an archive that had its own layers of stratigraphy, in which ‘facts’ were being made (and re-made) before our eyes, I could see the book that I needed – and wanted – to write. I could see my Tutankhamun story.

I’m about half-way through the book proofs now. They’ll be marked up and returned to the production team for corrections, I hope by the end of next week. In the meantime, I have the new exhibition to install, a few talks to give, and other people’s manuscripts to read and comment on as well. Being an academic is, indeed, an actual job – one that had my own parents baffled, though I think my father, who died shortly before I started university, had just about reconciled himself to its possible existence. Once I’d had my little crisis in the Oxford archives, and come home to write that first line and first chapter (‘…the lie to our glimpse of history’), I wanted to acknowledge that part of my own history. My own archive, as it were. That’s when I wrote a dedication page, with which I’ll end this entry. It’s going to be sandwiched between the copyright bumph and the table of contents. Some authors eschew dedications. I sometimes have, sometimes not. For this book, this felt right. Facts? Yes, from my perspective. Proof? Let’s hope so.

Writer and historian • Professor of the History of Visual Culture, Durham University View all posts by Christina Riggs