I’m not the only photo historian who trawls online auction sites in the name of research, or who can’t pass up a box of old photographs or postcards at an antiques fair. I don’t buy things online very often (especially since discovering how right-wing the owner of one popular auction site is), but now and again, something seems too good to pass up.

This week, I bought a press photograph from 1924:

The front bears the wax pencil marks for the printer to crop the photo to the left, showing just the face of Egypt’s King Fuad. Scrawled out on the right is the white-capped face of the country’s first elected prime minister, Sa’ad Zaghloul. On the back of the photo, a date stamp, more scrawls (‘Wed – City ed.’), and a suggested caption give us a more information about how the photograph was meant to be used: 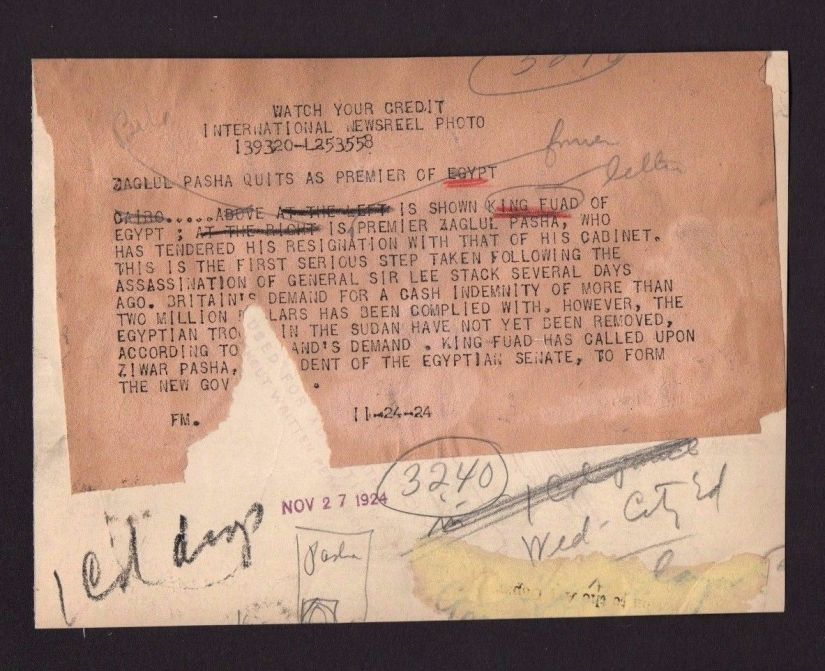 Britain allowed Egypt to hold parliamentary elections for the first time in 1923, a few months after the discovery of the tomb. The most significant nationalist party at the time, the Wafd, won by a landslide and its leader, Zaghloul pasha, became prime minister. Zaghloul was an elder statesman of the Egyptian independence movement, a former minister of education whom the British had arrested and deported in 1919, when uprisings against the British occupation erupted in Egypt. Zaghloul’s release from exile, and his return to Egypt in 1921, spurred confrontations between Egyptian political factions and with the British. From his home in Florence, photographer Harry Burton wrote to his boss, Albert Lythgoe, in the Egyptian Department of New York’s Metropolitan Museum of Art: ‘The Egyptian question is as far away from a solution as ever. A great fuss was made over Zag[h]loul’s return at first, although just before I left Cairo I heard that he had entirely lost his head […]’.*

Zaghloul had not lost his head – his temper, perhaps, since he was deported again and allowed to return only for the elections his party won. When Howard Carter’s feud with the antiquities service and the ministry of public works exploded in February 1924, Zaghloul spoke eloquently in defense of his ministry’s actions, throwing Carter’s claim of working only in the scientific interest right back at the Englishman: ‘Howard Carter does not have the right to lock tombs that are not his. In fact, the interest of science forbids this kind of behaviour’.**

But 1924 would prove to be a bad year for Zaghloul, too. On November 24th, General Sir Lee Stack, head of the British army in Sudan, was shot and killed in Cairo, the latest in several acts of violence and reprisals that marked the birth of the new, not-quite-independent Egypt. This time, Britain demanded compensation and a change of course from its former protectorate – hence the resignation of Zaghloul and his cabinet. Zaghloul died three years later, still a national hero for all that he had accomplished and all that he represented. Streets and statues in Cairo and Alexandria commemorate Zaghloul, who is buried in a pharaonic-style mausoleum opposite his house in Cairo, itself a museum in his memory called the Beit al-Umma, ‘The House of the People’.

If I were a newspaper editor in 1924, I’d have tried to make sure both Fuad and Zaghloul made it into the picture, or if I had to choose between the two, I’d have picked Zaghloul’s ‘country casual’ look over Fuad’s waxed moustaches and starched collar. Call me a lower-case republican. At least newspapers were covering the story: International Newsreel Photo was part of William Randolph Hearst’s news agency in the 1920s, so this was intended for the American press. The news angle on the story is a British one, admittedly, but it goes into Egyptian politics at the national level in a way I rarely see in any of the British and American newspapers I read. Not to mention that it’s an episode of British history forgotten by, well, any person or university class I’ve ever mentioned it to in Britain, other than historians specialized in that era.

One more connection to Tutankhamun: Stack and his wife had visited the tomb on November 22nd, 1923. Carter showed them around on what was an important occasion, given Stack’s position. Also part of the delegation that day were the governor (mudir) of Qena province and the mayor (mamur markaz, ‘head of the district’) of Luxor. Some archaeologists and Egyptologists think politics has nothing to do with them, whether that’s politics in the past or the politics of today. But this single photograph and its backstory show how and why politics is everything in Egyptian archaeology. And everywhere, since politics even has to do with the use of online auction sites. This was photograph I just couldn’t pass up. I’ll donate money elsewhere to salve my conscience.

* Letter from Burton to Lythgoe, 28 April 1921, on file with Burton’s correspondence in the archives of the Department of Egyptian Art, Metropolitan Museum of Art.

Writer and historian • Professor of the History of Visual Culture, Durham University View all posts by Christina Riggs